A friend emailed me a picture one day that contained a juicy mystery: Jim Bernat had two IFS sleds in 1977.

We knew Jim Bernat had a 440 IFS sled in 1977 – he raced it as early as the race in Alexandria, Minnesota in December of 1976. We also knew he had a leaf spring sled that he raced in Ironwood Michigan and Alexandria. But no one, till we saw that picture, ever thought Bernat had a second IFS sled.

The picture from the pits in Eagle River clearly shows two sleds carrying Jim’s #269 on them!

This meant there was possibly one more of those iconic 1977 sleds out in the wilderness!

By looking at some other photos, it was clear that Jim took his seat off of his 1975 650 and put it on his 440 77 IFS sled for Eagle River. The other sled, we learned from checking the results from the race, was, in fact a 340.

Bernat retired after Eagle River. We now know that by Milwaukee, Steve no longer had a leafer, and was instead driving an IFS in the 250 class, as this photo demonstrates:

Brad Hulings at one time mentioned that Bernat’s sleds were handed down to him and Thorsen. So it was likely that Thorsen got the Bernat 340 (with a 250 motor) right after Eagle River.

The real clues came upon inspecting the sled that we now know was Bernat’s 340 at Eagle River 40 years ago. The sled was on the East Coast, in near perfect condition, and it found it’s way home to Minnesota. The serial number on the sled was a match with the Eagle River Derby Track archives as the sled Jim registered for the 340 class.

The motor in the sled today is a 250, and on checking those serial numbers, it was the very same motor that in Thorsen’s leafer 250 from Eagle River. So mostly likely, they pulled Jim’s 340 motor out, put Steve’s 250 motor from his leafer in and the result was this sled: 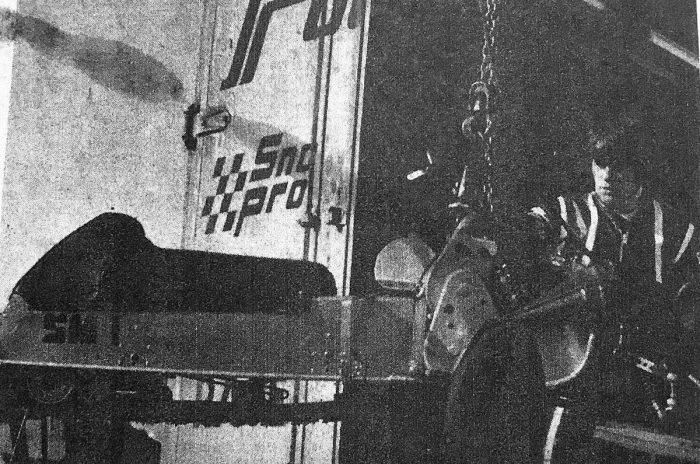 After that, we know the sled was sold from Polaris to the East Coast in 78 or 79, and was raced by Paul Dunham, only for a year or so. It has largely sat, untouched for the majority of the 40 years since Bernat and Thorsen made it famous.

Today, she’s in a good place where it’s likely all she will get is a good cleaning, so 40 years from now, someone else can have the joy of rediscovering her.

My thanks to the many, many people that have been working very hard to get all the history right:
Brad Warning
Boyd Burke
John Deitz
David Olson
Steve Herbst
Steve M.

And all the people on the internet that just keep posting photos.. all of which are helpful!